Once again, Sports Interactive is back with its yearly football sim smash hit, Football Manager 2022. Fans of the series know what it’s all about, and that is late nights combing through emails, scouting reports, and saying to yourself “one more match.” Wildly considered the best sports simulation out, Football Manager can be summed up by this PR statement:

“Step into the shoes of a real manager in a living, breathing football world where the fate of your club rests with you. Real-world insights and new gameplay mechanics combine to deliver dynamic, true-to-life experiences with greater levels of drama, depth and control.”

This isn’t the game for someone who is not ready to dive in head first. There’s a mobile/touch version for that. Instead, Football Manager 2022 is for those of us who want to know what it’s like managing a real club. Everything from matchday to scheduling training sessions is under your control (or delegation if you so choose), so stepping into this arena requires patience, time, and a lot of reading. Before we get into the guts of this Football Manager 2022 review, let’s take a look at what’s new for 2022.

We’ll get into this a little bit later, but one of the more noticeable upgrades is how much the matchday graphics have improved over the years:

While some might still prefer the tactical camera, I have been enjoying watching my matches play out on the various pitches across the world. While the graphical level isn’t on FIFA’s level, Football Manager 2022 is by far the best so far when it comes to graphics in this sort of simulation. 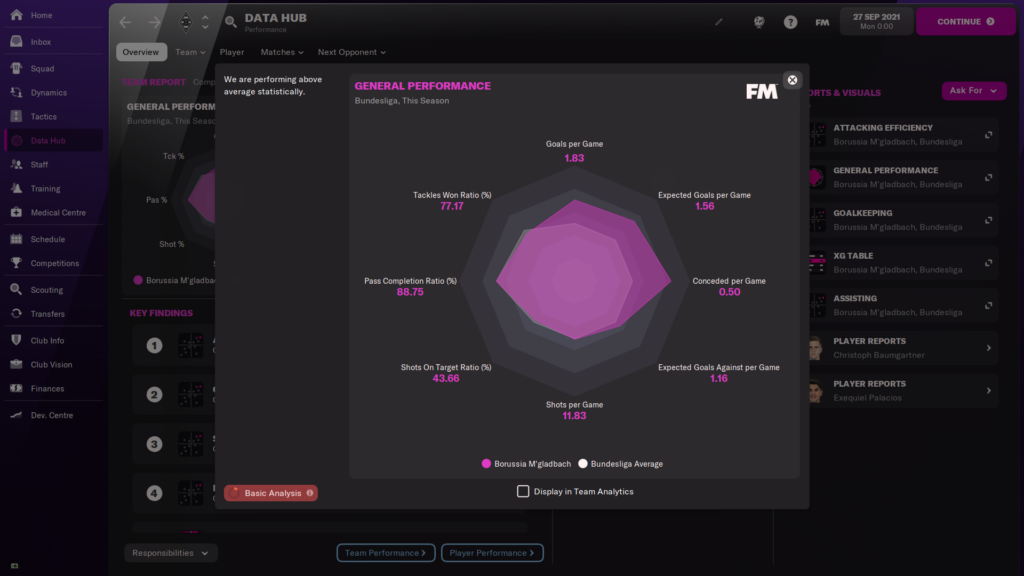 Find your winning edge in the all-new Data Hub with the same analytics and reporting methods that the biggest and best clubs are using in the professional game. Create your own custom dashboard packed with stats and insights that will help you understand your performances and make smarter decisions on match preparation and player development.

Data, data, data….give me ALL of the data you have. Sports Interactive has been paying attention when it comes to advanced metrics. While the eye test will always hold some weight, being a top-flight manager in 2021 means that you have to comb through copious amounts of data from your analytical department, and thankfully Football Manager 2022 delivers in this department. Expected Goals (xG) is one of the more popular metrics, and it’s reflected and calculated quite well this year. 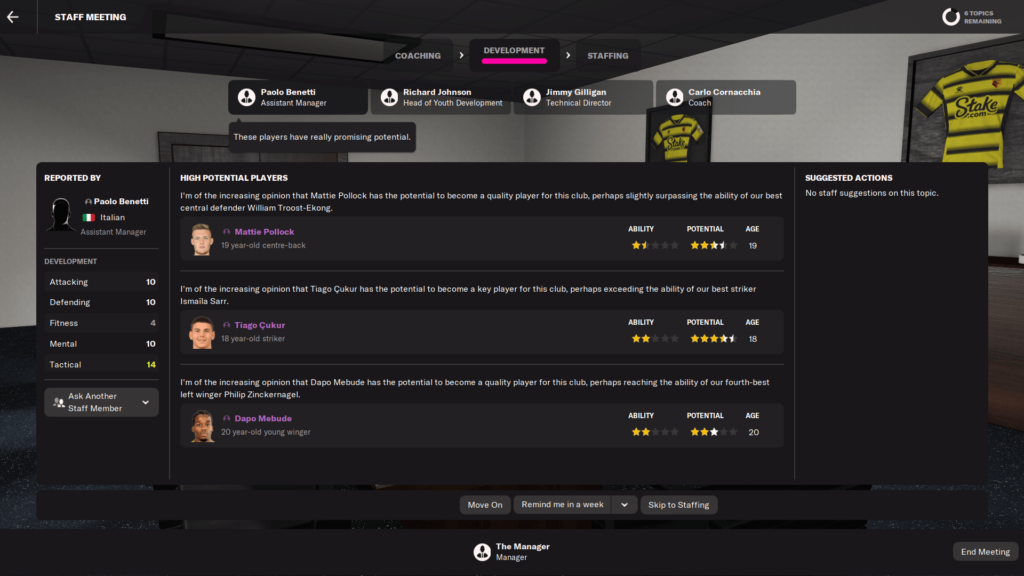 Based on real-world insight from managers across the professional game, new, true-to-life staff meetings allow you to lean on your backroom staff more than ever. With the frequency set by you, your inner circle gatherings now provide a greater a level of support and organization that will propel your project and players to new heights.

Admittedly, the staff interactions can be quite overbearing to the novice FM player, that is until you learn the power of delegation and/or setup your routine. Scheduling staff meetings weekly or bi-weekly is under your command, so it’s up to you to figure out how involved you really want to be. 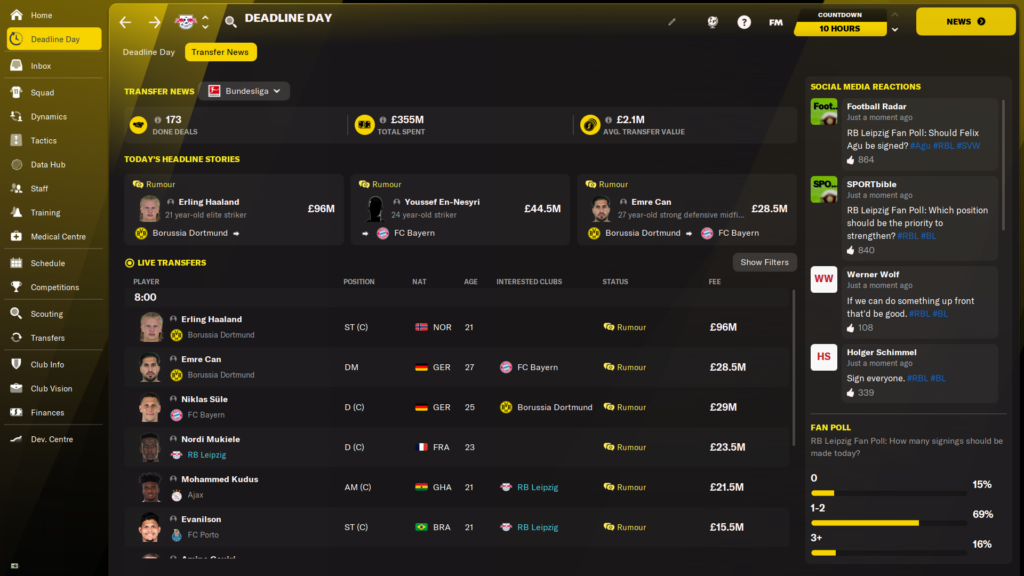 Feel the highs and lows of one of the most dramatic fixtures in the football calendar with a redesigned Deadline Day experience. Replicating the unpredictability and immersion of the transfer window’s climax, the revamp completely changes the dynamic, as does a rewrite of player values and a host of new scouting improvements.

There is not a more hectic day in sports than Transfer Deadline Day. Between rumors and speculation flying across Twitter to fans tracking players’ flights, replicating the absurdity that occurs on this day is something Sports Interactive has fully embraced and replicated in Football Manager 2022. 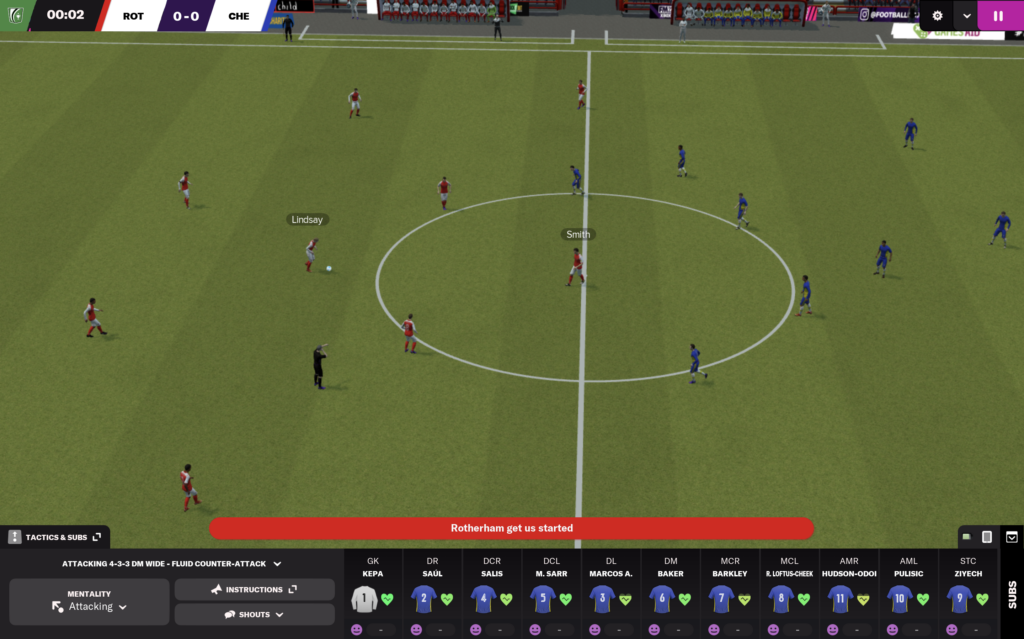 Having played Football Manager for quite some time now, it’s safe to say that the matchday experience is better than ever. From the tactical instructions to the pre-match locker room pep talk, nearly every aspect of what happens on the day of a game has been improved.

Graphically, as said before, Football Manager 2022 looks better than ever. It looks great in screenshots, and in motion there is a plethora of new animations that have been added to provide a better sense of realism despite the game not really being about animations and on-field movements. Seeing dribbles, tackles, and shots that look more lifelike goes a long way to bridging the gap between those who want to be the coach and those who want to play.

Because the game is a simulation, full control like you would find on FIFA or eFootball will most likely never happen, but it’s still nice knowing that Sports Interactive has invested in making the match look more authentic through its new animation engine.

To take in all of the changes Sports Interactive has made, you have to watch a match play in its entirety. This isn’t something I normally do or would even recommend as it slows down your ability to get through seasons, but it’s here where you’ll notice things like first touch error, passing error, and the likes which were all added or improved upon for 2022. With the tactical in-match options still stellar, the visuals have improved as well. While they’ll most likely never catch the off-the-pitch side of things, they’ve reached a new high this year. 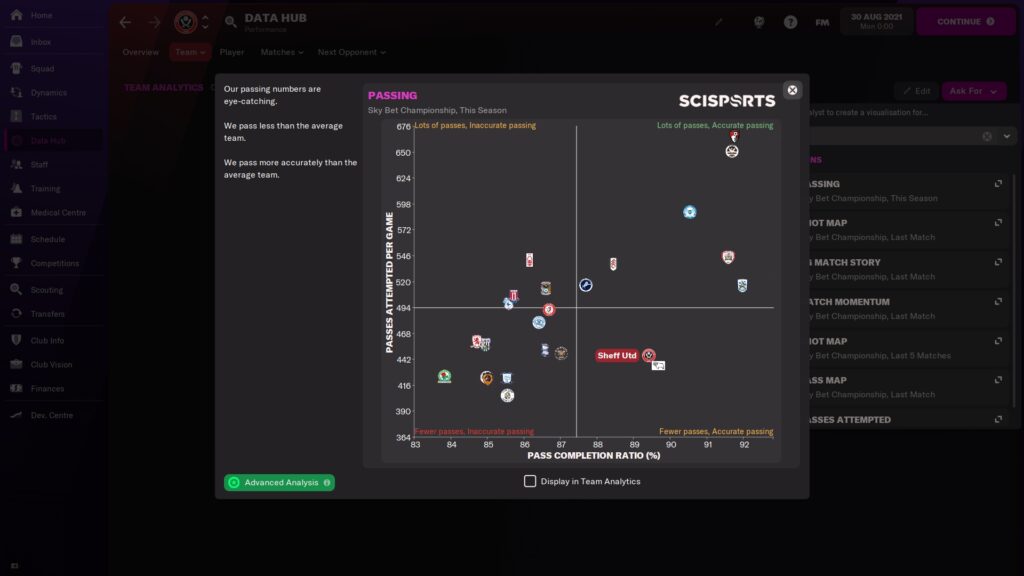 Advanced stats and data aren’t everyone’s cup of tea. However, I do enjoy a nice cup, so I have to say I’m extremely impressed and find myself immersing myself into the data, especially the post-match reports. I look at them for what they are, reflections of my tactics and how well my players are carrying out my instructions.

Are my tactics not suited for players or do I need to adjust them to get the best out of the team? These are the kind of questions that I’m asking myself after analyzing the match reports. Now that everything is centralized, it makes combing through the data that much easier. 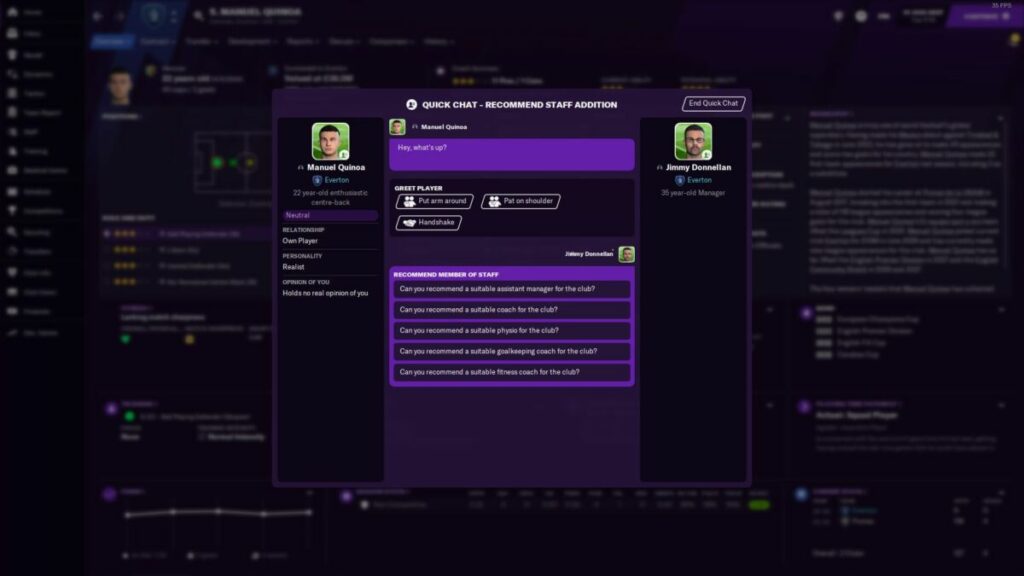 In short, player interactions are at times repetitive, at others confusing. Encouraging words after a nice performance can lead to a morale drop. Even contract negotiations can get sticky if you come in with an offer slightly less than what the player is expecting — you know, negotiation.

As Chelsea, my first contract negotiation with Antonio Rudiger did not go well, and he and his agent made it very clear he was leaving on a free at the end of the year. Repetition is something that plagues any sports simulation. I’m no Ted Lasso, but I’m also far from Nate. Things can turn sour in a locker room very quickly, and a little bug like a player taking an encouraging talk the wrong way can cause havoc in your locker room.

Look, I know there’s a ton of data being crunched under the hood. Football Manager is, at its core, data, combining some logic with a bit of randomness sprinkled on top to make the apple pie of sports simulations.  Despite that, I do find the loading times that happen when you advance a day to be a bit too long. Conversely, this is probably a testament to how the game entices you to want to advance quickly in order to get to the next match or make that big transfer move. 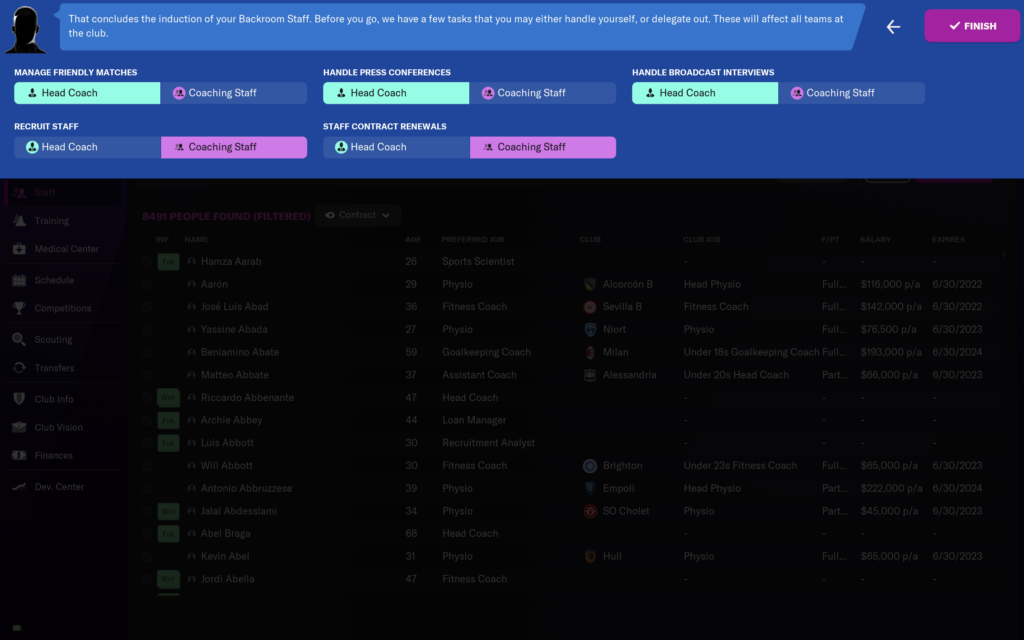 Every sports simulation game suffers from repetition, and Football Manager 2022 isn’t immune. It’s going to happen, especially with the Pep Guardiola-like total control you possess over your squad. All of the reports and data can be a lot to handle, especially if you’re new to the series. I still refer back to this blog about setting up staff responsibilities as sort of a starting point every year.

Once you get a feel for their roles, you can carry over a general philosophy to each new installment. That said, to get that point means you have to do a lot of advancing, which means you’re going to see a lot of the same things. 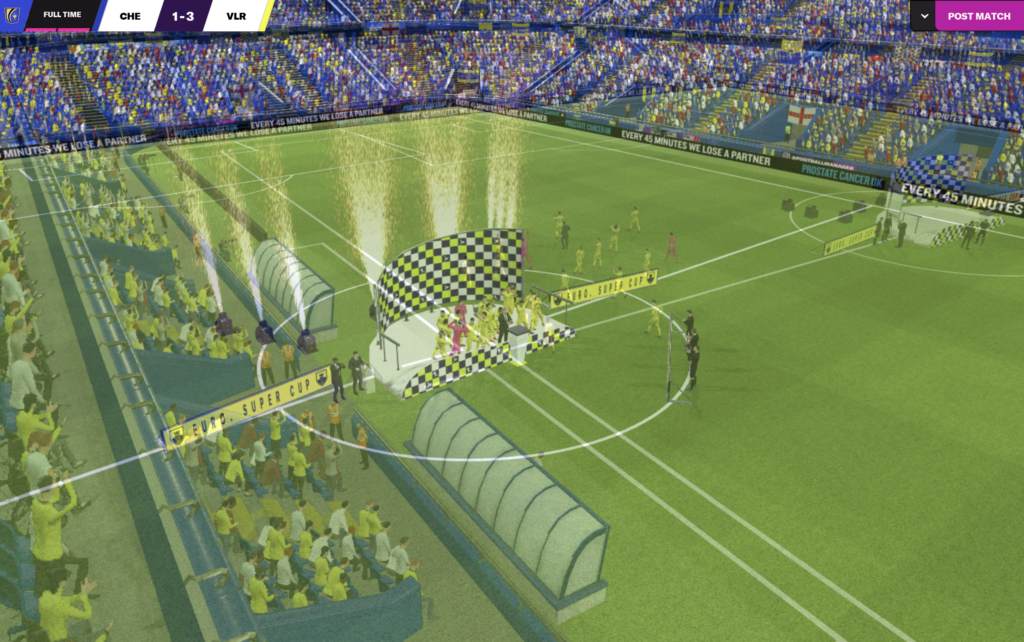 If you’re looking for huge, wholesale changes, Football Manager in general isn’t the game for you. The series, including the 2022 version, is more about refining what the game already does well as opposed to huge series changes. Year-on-year improvement has worked very well to this point, so why change things now?

Overall, it’s another year of the most dangerously addicting sports game, rivaling that of Sid Meier’s Civilization series in the way that it eats through time. “I just want to make it to January” is something I’ve said in my mind for countless years now before I pay for it the next morning. There are few games that deliver as consistently as Sports Interactive’s Football Manager. This year’s version could be its best yet, especially given the scaled-down versions (touch and mobile) that allow newcomers to the series to taste it before buying.

Small meaningful improvements to nearly every aspect of the game is where you want to be as a gaming company, regardless of the genre, and Sports Interactive delivers with Football Manager 2022.

We’ve been talking about college sports returning to the video game world more and more as of late, but we’re still totally in the dark when it comes to any promise of a future college basketball title. With that in mind, it’s great that people like traveltall and Adam7610 are still making updated rosters for…

Windjammers 2 is scheduled to release on January 20 for PlayStation 4, Nintendo Switch, Xbox One and PC, including Xbox Game Pass and Xbox Game Pass for PC. The game will also be backward compatible on PlayStation 5 and Xbox Series X|S. New challengers, new stages, brand-new mechanics and new power moves will make your…

The NBA season continues to be in a weird spot right now with the continued spread of the Omicron variant. This health issue is making NBA games feel bizarre because you might not know half the players on the rosters on any given night. That said, in the NBA 2K22 arena, we’re in a spot…